Not bein a 21st Century Schizoid man,I can't do video.It'll have to be just a static shot.don't hold your breath for batwing shots.It's still not painted and w/ a week of rain ahead ,it's not goin to be happenin soon.

Soon as I read this I went ahhh! ....King Crimson... I still got the album(vinyl) , bought it soon as it came out ,those were the good ole days! Your showin your age Denn... but then again I guess I am too.

Wow you guys are old!! I thought April Wine originated that one but they actually covered it!! Damn that's funny...next you'll be tellin me Streetheart covered "Tin Soldier" and never wrote it.....

sunnydog wrote:Wow you guys are old!! I thought April Wine originated that one but they actually covered it!!  Damn that's funny...next you'll be tellin me Streetheart covered "Tin Soldier" and never wrote it.....

Got another E-mail from Sam.The head is in the mail!!

Just now got another E-mail.I may be getting a new set.
Whooeee!!

Got a decent day last week and got 3 coats of paint on the faring.Now to get the scoot outa the shed and install it.

Bit of a quandry whether to wait for the new head(s) or just say," fuggit" and go with what I've got assembled.Not too enthused to totally strip the scoot down again.Time is runnin down for road tests to make sure it'll be tickety boo for long hard travellin.

Went to the Coombs Swap on Sunday and picked up a repop front Pan-style fender bumper/rail.Also an OEM mud flap for the front fender to replace my torn home made one.These won't go on til next winter.Both bought from Dewey.
Also scored a good set of wind deflectors to replace my patched ones that won't fit on now.The new-to-me ones are a different style and easier to put on. I think that I can make these work.WooHoo!!
Got a free H4 headlight lense to have on hand if mine should get stoned.

Ran into Chef jmac there.He was lookin for Rat bike parts but didn't have any luck.

EDIT:
Strange the way my ears & brain works.It's now April 10,8:30 am.Into my head pops this.Jmac is lookin for a RACK for his tour pack.When I asked him what he was lookin for I heard RAT BIKE parts.Once I heard him say small tour pack I knew that I'd heard wrong, but days later the initial thought was what came out.

jmac fuck if I know what happened there

what you needing to find for the beloved rat jmac??

Got an E-mail from Sam in Smithers. The heads are there and he's shippin collect ASAP.I have to send my front S&S head to him collect to complete the warranty. 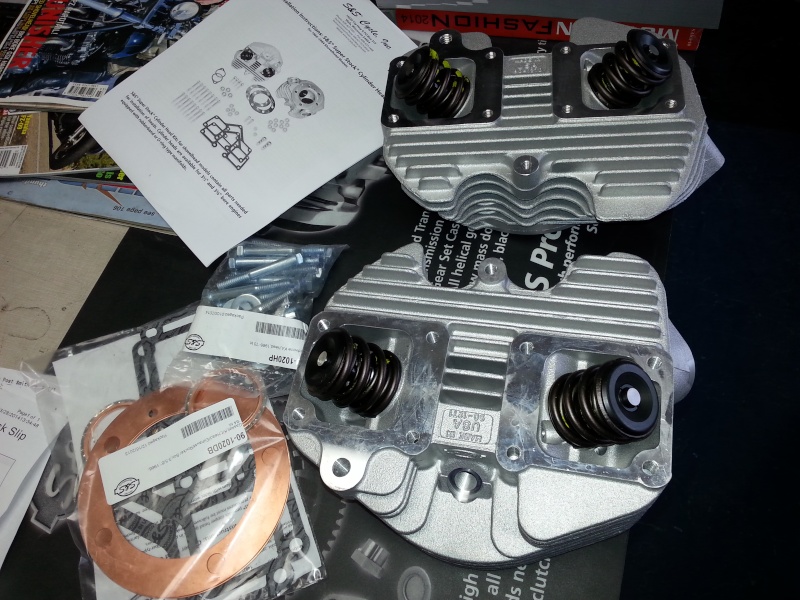 Needless to say I'm Ecstatic,Surprised and very thankful that Sam (Eyecandy Customs) in Smithers got this result for me.

Back to the shop for the teardown.Want to get this done before May 4.Swap meet in Campbell River that I want to ride up to.

Great news Den , still some hope for us little guys

I'm pretty sure ,Dave that had I been tryin to deal w/ S&S personally I wouldn't have had this happen.I owe Sam all the credit for gettin this result.He's not a big indy ,so whatever he said in his communications w/ them was pivotal in S&S decision to warranty the heads.I would have been happy to get just a back head but the complete head,gaskets, rocker bolts kit was unexpected.

Spent a few hours in the shop pullin pieces off today.Didn't take long to get the heads off.Got the front S&S head ,that i'm sending back to Sam, boxed.I'll send it when I hear from the Greyhound that my Package is here.
Time to clean front  piston,cylinder and rocker box mating surfaces.

All cleaned up and waitin for heads!

Lookin around the scoot and wonderin why there was so much motor oil under and on the tranny.Found my crankcase breather hose just layin on the bottom x-brace.Apparently when I put the bottom end back in ,I forgot to hook the line back up to the nipple.
Should be a little cleaner this year.

I was gonna say sumthin bout that dirty bike...then looked at my own and thought better not LOL...

The new shiney S&S heads are in my shop.Now a couple head gaskets to get annealed and Copper Coated.The reassembly can then begin!

Should you anneal new copper's cause I never have and have put on ten's of thousands trouble free miles. No copper coat neither but maybe that is the advantage with 7:1 compression. Nothing beats low compression imo. So much less trouble and any gas you want to use with no detonation. And it still climbs the mountains in 4th:) You low comp too, right?

zaac wrote:Should you anneal new copper's cause I never have and have put on ten's of thousands trouble free miles. No copper coat neither but maybe that is the advantage with 7:1 compression. Nothing beats low compression imo. So much less trouble and any gas you want to use with no detonation. And it still climbs the mountains in 4th:) You low comp too, right?

I never did before but head gaskets are a real chore to redo so I take all precautions when puttin them in.I've read that the punched out holes are hardened around the edges by the process.The big bore hole sits on an raised machined surface on the S&S barrels.I want to be sure that the copper compresses really well there.No big deal to heat the gaskets up red hot on an electric stove and quench them in cold water.

Sounds like a good plan, Den. That little lip on the barrels makes them seal nice. Not much chance of sucking oil in then.