Eureka It is Found!!

Eureka It is Found!!

Last spring I took the Weerier on her annual elevation run up Mt. Washington to make sure the carb was still runnin good for The Tour 2015.At one stop I heard a tinkle as I took off my gloves.Gave a real good look around on the asphalt but couldn't see anything.Upon arriveing home I realized that my shovelhead ring,that I had just bought, was AWOL.

It was too late to go back up the 20 some odd miles and look again.I left on the tour shortly after.
I did do a search when I got back.I had no expectations of findin it but,it was an out of the way spot and I had that nagging voice in my head."If ya don't at least try and look then ya haven't gave it your best shot." Pretty much that same voice that I had out near Lac La Biche when I lost the saddle bag lid.The follow up search was fruitless but a beauty sunny day

none the less.
Anywho,the weather here has been the shits with rain and cool temps.The horse field is a quagmire of muck.Can't get the wheelbarrow into the top of the field ,after cleaning the barn,for the few piles of crap strategically placed there by the steeds.I walked out with my trusty scoop shovel.I'd got one pile picked up and there was another very small scatterin along the fenceline where it's minimally dryer and the horses walk .I almost headed back to the barn but did a hitch step and that voice started yackin ."Pick it up."So I slogged over proceeded to hand pick the few pucks into the shovel.Done and just as I started to stand ,I caught a shiny glimps in the muck.Pulled it out and much to my surprise

.I thanked the horses for there strategic deposit right there and The Voice for naggin at me.
Apparently I had lost the ring before I took the ride.I had this question when I realized the ring was gone,"Why did I have my ring on in my gloves?" ,as it is a tight fit.I usually remove it before gearin up.Chocked it up to just bein too eager to get puttin and had figured the missing ring had come off when I heard that tinkle up the mountain.
Well that has made my day and got me some energy to finish off around here rather tha bury myslf in the world of crime/mystery novels.

Good to hear a happy ending. I guess it happens from time to time lol.

zaac wrote:Good to hear a happy ending. I guess it happens from time to time lol.

Third time that i've found a lost ring just by happenstance.
While lookin through boxes in my shop to find spare bike parts,I found the gold ring that I'd lost a yr. previously.Bren gave it to me so there's some sentimental value.
That same gold ring that I'd lost at Horsethief I found 3 yrs. later while resetting my tarp after a heavy wind.
And now this one.
Lesson learned.

Do not wear rings when workin with my hands.

Hey Denn, It`s good you found the ring, but did you find the tinkle?
Cheers Buddy!

h.d.ryder wrote:Hey Denn, It`s good you found the ring, but did you find the tinkle?
Cheers Buddy!

I think it was the lock-nut on my rear exhaust flange stud.I found it missing but can't remember exactly when it was.

...at least it got
...by heavenly act
...a cleaning through
...digestive tract

Not in the hay,
But in the muck,
To find it there,
Just horse shit luck!

I'm not the one to feed the hay,
So out they shat it as you say,
Cannot be how it found it's way,
Into the muck and found that day.

I must have stopped to fix the fence,
And dropped it then without the sense,
Of slidein ring onto the ground,
To rest there til it was refound.

Alas we talk
and still converse
in iambic
pentameters

And friend that was my thinkin too,
That we should end poetic prattle,
Lest friends should think we've come unglued
Or maybe just a little addled. 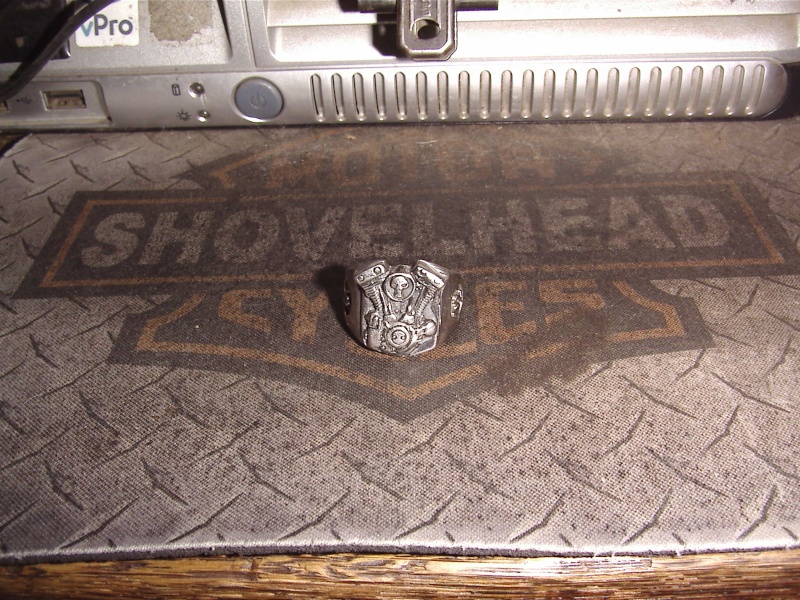