Hey Sonny and Coop ,
You got any pictures of the bash in Toon Town ??

Larry,
Will try post some up...we had a real good time...Shovels ran flawlessly 1200 miles, even had a good bout with LOSR and LORSR (Land of Shitty Roads and Land of Really Shitty Roads)....but what else would ya expect when travelling thru the Straw Curtain lmao...
Sunny

Left on Wednesday the 27th after work, couldn't have been a more beautiful day for a ride in the Rockies, alone on the Econoline approaching Castle Junction from the Continental Divide

Arrived at Ma and Pa's in Cochrane about 8 o'clock that night, none the worse for wear 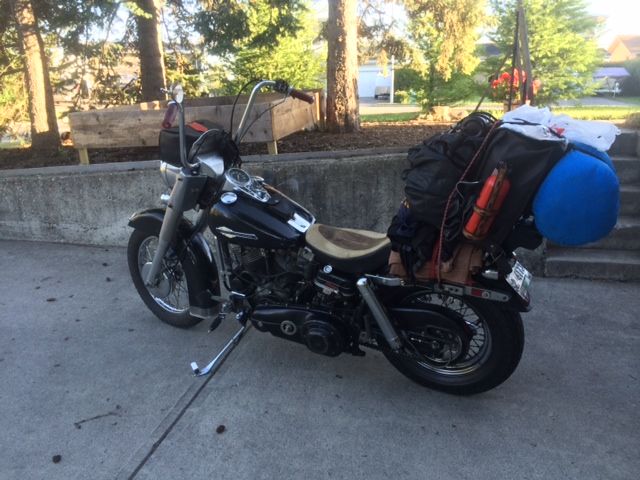 Met Carlos in Strathmore for breakfast, rode on thru to Drumheller in the badlands of central Alta....at this point, as Koot might put it, "Mother Nature was rubbing her nether regions, preparing to give the Retards a good douching!" 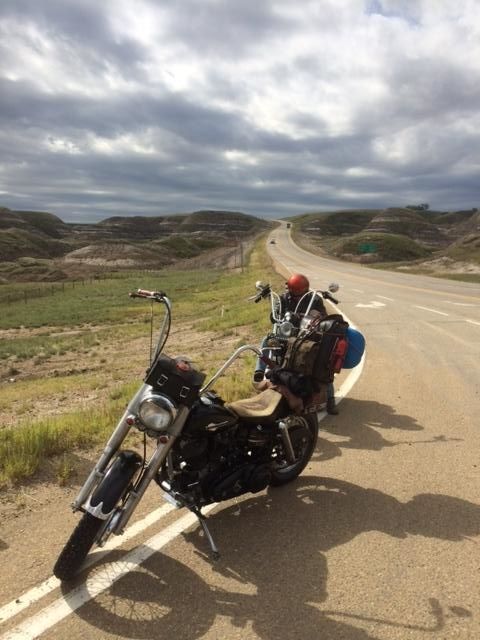 ....and because we're retards

....we decided to take a little side trip to Wayne, Alta....an old coalmining town in a box canyon just outside Drumheller, cool old hotel called "The RoseDeer", and the Last Chance Saloon 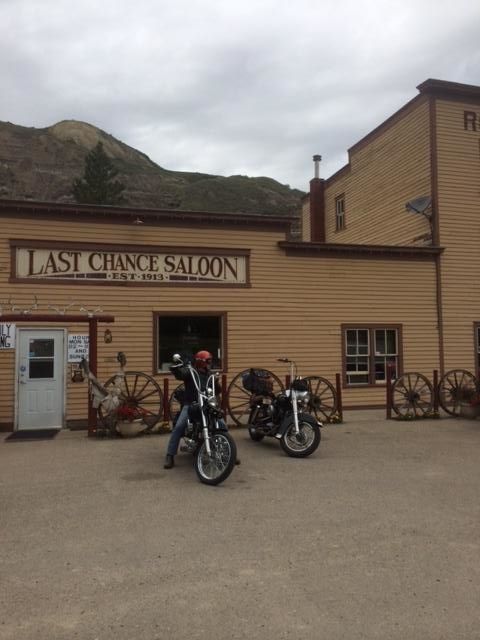 There was alotta interesting pub history here, the band was really good and woulda been fun to shut this place down and camp but....

....we had ta carry on, so out the door and back across the 11 bridges on this little creek in the desert 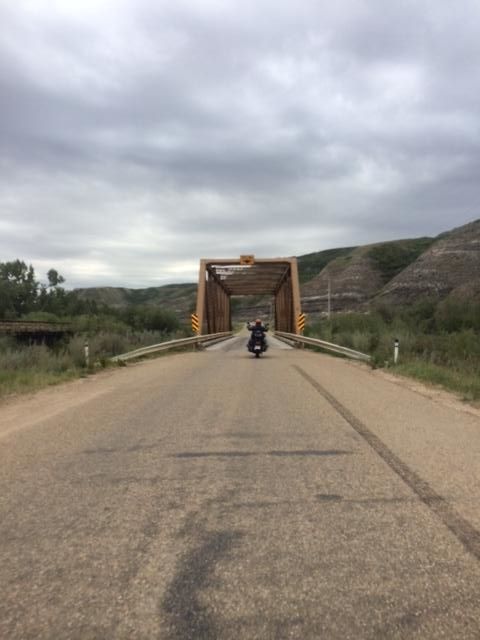 and then ma nature said hello....

No pics for a few hundred clicks cause we got douched real good, dried out a bit with some riding in high cross-winds, then in another brilliant leap of logic the twins decided to explore LOSER (land of shitty eastern roads).  Jmac and Dennman are intimately knowledgeable about LOSER, and any others whove ridden around these parts.

Here's the recipe far as I can tell: Start with "one lane hardtop", mix in potholes, frost heaves that never go away, strange soft patches which are terrifying, marble to rock sized gravel which suddenly crops up with no warning, oil impregnated sand which is poured on low spots then harrowed with a farm tractor, sloughs that are simply shored up with lock blocks....you get the picture.

Well, we ended up southeast of Alsask in a little town called Eatonia, the baltic portion of Saskatchewan, finally tapped out and got a hotel and some twink food.... 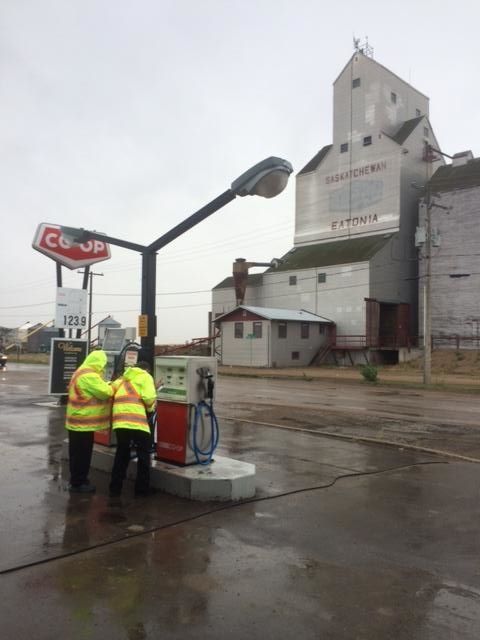 Then the morning broke with sunshine and we forged on through the Straw Curtain, becoming LOSER hero's

An example of some Saskatchewan roadbuilding ingenuity....should last a couple days at least, unless it rains again LMAO

Mark from Elk Point ('79 LowRider) hooked up with us at Eston, Sask....joined us to take part in the LOSERfest, and thoroughly enjoyed it...

On we went with fair weather, arrived at ToonTown in time for Carlos girl Sweet Jane to spit out a clutch cable ferrule....but she did so directly in front of a mechanic shop which was just closing.  The old feller there took pity on us and helped out with a farmer fix....must say we were some impressed with the generosity and friendly demeanor of everyone we met in Saskatoon....

We arrived in Dundurn (bout 30 clicks south of S'toon) just in time to watch a beautiful prairie sunset and start into the heavy drinking and carousing...this is where the Twins true genius begins to shine thru

Set up the tarp next to the Carragana bushes as a shelterbelt....and as luck would have it the night brought high winds from the East, which blew right up our skirts, and some more cold rain...a bag of wet Nachos was my only solace.... 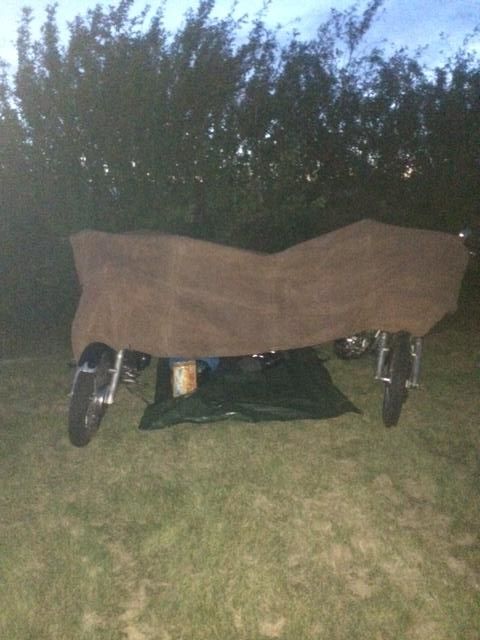 ....and then Saturday it started getting drunk out 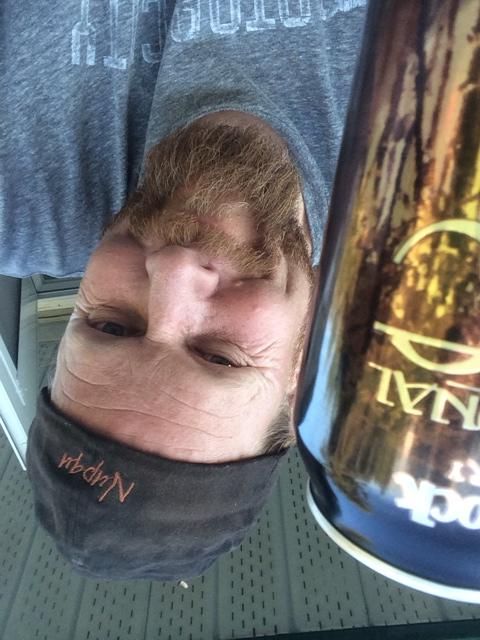 ....after awhile it got downright weird....I'm not sure if this even happened but the camera don't lie 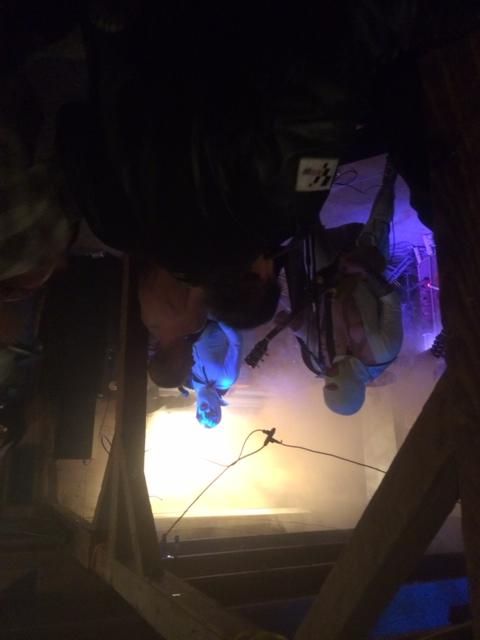 Soon it was time to go home...a stop in Oyen to stretch the legs Sunday aft

Finally Econo rolled into the driveway at 6:30 last nite

Very Cool!
Thanks for posting.

Great ride tale and pics Sunny.Never made it to Alta. this year. Good ta see some of the places that I've cruised through.Sounds like you hit roads surfaces similar to the #15 that jmac and I endured.
Did ya happen to run into a chopper builder from Wainwright? Heard,just recently from a transplanted Islander, that coast fellas send their work out to him there.His shop usually has old iron scoots gracein the pavement out front.

Might that fella be named Beaker? Heard tell of this guy, rides a 66 FLH daily...

Well done brotha!!! You are the minstrel and keeper of the faith! I always get a good laugh out of the road stories lol…..
and just to add to the clutch cable story, none of the shops had fuck all to help a guy out with and we were told by most of them on the phone when asked about 4 speed clutch cables…"good luck buddy"….but we had to have broke down in the best spot in all of saskatoon, right at that gas station and 4 houses down from Mark…a buddy to Brian and the boys and he hooked us up with a new cable. By the time he had got back we had the old cable fixed right up and its still going strong….

The one thing you forgot

Was to mention about that guy that pulled up minutes after you took that photo in Eatonia. What a fuckin strange dude……guy pulls up and says hey you guys broke down or just out of gas, bla bla? Sunny says nah we are ok but we are thinking of starting up a sickle shop under the ramp going into the elevator over there. Guy says hey I run the local bike shop around here……says he is just getting ready to go on a run somewhere he couldn't tell us where, says he is getting his 13 twink all shined up (rainbow parade) LOL….So i says well fuck why don't you run your shovel (just to see if he has one) well what a fuckin mistake that was……starts spewing bullshit on command….well I am just getting it all set up, Its a 75 FLHS and I put a set of andrews 5 speed gears into the original turret top transmission so it would still look like the 4 speed, I put on a tour pack so I could mount nitrous bottles in it, and I put flame throwers out the exhaust??? Ya ok bud….how about you fuck off weirdo??

If you thought that story was wierd check this video out:

Shirtless Pit Dancer in front of the lead singer is none other than the infamous "Shovelhead Pat"....tap on the pic to see video

Looks like Shovelhead Pat might of got a "tap" or 2 from a couple of the boys there.

Carlos and I were rolling on the floor holding our sides we laughed so hard....Shovelhead Pat was about 5'3" and 100 pounds but was seemingly immune to pain and abuse....he constantly tried grabbing the mic and this band was well versed with dungeon shows because they simply spun him around and would boot-fuck the little bugger out into the middle of the moshpit....where he would inevitably be body checked and punched by the average Sask farmboy, 6'2" 210 lbs....Pat would keep comin back for more abuse, he revelled in it....quite a show

The song title of this one: "One in the stink"

I was laughing so hard this afternoon I almost hit the ditch talking about shovelhead Pat the shirtless Pit Dancer!!!  Pretty sure Pat wasnt much more than 4' 6" lol..
I'm sure everyone that passed me on the highway were concerned why I was laughing and smiling to myself in the truck lol.
By the way that crazy bunch of fuckers playing the music is Savage Henry…..they actually put on a pretty damn good show!!

Your trip into sask sounds just like mine the first thing I did was break a clutch cable to.And did the farmer fix .Then I hit a pothole that snped my starter off and destroyed my front end:scratch: jmac

Ya know Chef, we didn't really believe the roads could be bad as you guys described.....but they were worst!